Some thoughts on the Shoulder Seasons in the Boundary Waters

October 4 I begin my last paddling trip of 2014. A week with Dan Cooke and four guests in the Boundary Waters Canoe Area Wilderness. Dan calls it a shoulder season trip,  “That time of the year when weather is neither winter nor summer; but both.”

Because shoulder seasons happen both in spring and fall, they are often lumped together. I will point out some significant differences that determine how I will pack and prepare for this upcoming trip.

The main difference is all about daylight. On May 15, the Boundary Waters receives over four hours more daylight than on October 15. If you figure on sleeping seven hours, your available daylight is twice as long in May as in October. So in the autumn, trip distances must be curtailed, or travel accomplished hastily with a sense of urgency.

Also in autumn, there is more darkness in camp. I bring a spare set of batteries for my headlamp. A lantern, unnecessary in the spring, is almost essential in the fall. I prefer a propane lantern and, despite carbon monoxide warnings to the contrary, I often use it to take the chill and moisture out of a tent. With Dan, we bring one of his CCS winter tents. These are made of syl-nylon and as light as a traditional tent but five times the size! We also bring a tin wood stove, so it is a cabin-like refuge when the weather is more wintry than summery. Last October, one of our guests inadvertently got his sleeping bag drenched. We were able to spruce up the fire in the stove and dry that down bag in just a few hours. The alternative? well, I cannot think of a good one. The angle of the sun is dramatically lower in October. The sun lacks punch to dry wet clothing or bedding. The longer nights often mean lower temperatures. We let the wood stove die out when we turn in, and I bring a warmer sleeping bag in the fall than I do in the spring. 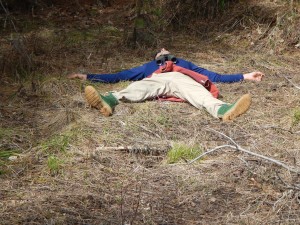 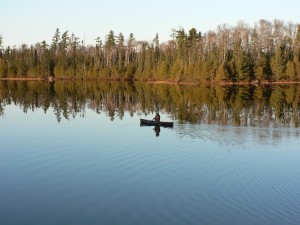 Fall can be gorgeous 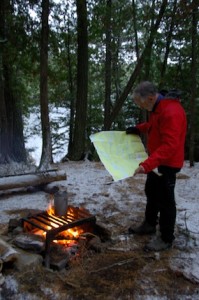 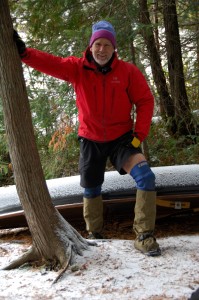 Travel is also different. Portage trails in the fall are at the end of their maintenance cycle and in tip-top shape. In the spring, those same trails can be cluttered with blowdown from winter storms and mud from recently melted snow. Dead and down firewood is more likely to be sodden in the spring and the ground itself damp and cold.

Wildlife is also different. In May, many species of birds are moving in and through the BWCA. They are vocal and in mating plumage. By October, most of the migratory birds have already split, and the straggling loons are quiet and molting into their drab winter plumage. But the grouse are at their peak population in the fall, and you can sometimes witness amazing migrations of waterfowl. Birding for resident species is good in both seasons because the deciduous trees are leafless and not obstructive. Moose and deer are rutting in the autumn. That is exciting. Wolves are more vocal . That is exciting too. With the longer nights, opportunities to view the Aurora are enhanced in the fall. For the hook and bullet crowd: There is no hunting in the spring. Most fishermen have concluded that the “fall bite” is mythology. Exquisite woodland flowers in the spring, turning foliage in the fall… Although, by October 1, the only color left is the larches, but they can be spectacular. Waterfalls more robust in spring as are ticks.

I like to single portage in the summer and skimp on clothing and gear. In the shoulder seasons, it’s best to be prepared for anything. A bit of redundancy rather than being staid and silly is a good move. Double portage is the way to go after September 15 and before June 15.

One definite difference. In spring, when the weather socks in, you know it will eventually clear. Stuck in a late October storm, you begin to wonder if the “shoulder season” has ended and if it’s time to start bending the Black Ash into snowshoe frames.