Back from the Noatak and Kugururok 2015 Expeditions 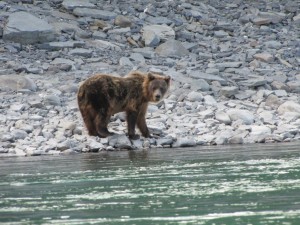 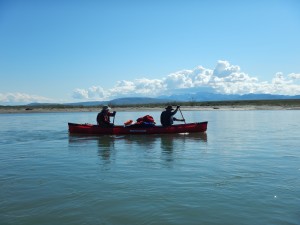 Back from a magnificent summer in the wilderness. We had excellent weather and a perfect water level for this year’s Noatak River expedition in arctic Alaska. More importantly, I had another outstanding crew. Despite a thirty year age-span, both genders, and paddlers from across the United States, the crew got along splendidly. Each crew member brought situational leadership skills that contributed mightily to the success of the expedition. The crew included anglers, navigators, campcraft experts, birders, barbers, storytellers, whitewater enthusiasts, cooks, pot scrubbers, and best of all they all shared an open, “never better” mindset.

We were rewarded with views of 23 muskoxen, 13 grizzlies, 2 wolves, 3 moose, 3 fox, a couple dall sheep from the plane, a caribou, a porcupine, a marmot, several sic sic and also some excellent bird sightings including, golden and bald eagles, rough legged hawks, gyrfalcons, peregrins, merlins, 2 species of jaegers, 4 species of loons, many shrikes, plovers, gulls, ravens, pipers and several songbirds including the rarely seen Siberian Tit (aka grayheaded chickadee — but I prefer the old name).

Dozens of the rapids that were washed out in 2014 were back in business this year, but were easily managed by all. No tipovers, no portages (except a short carry to the village after 400 miles!) Food was ample or as some of the crew remarked, “just enough” but no one went hungry and we feasted several times on salmon and grayling. Even so when a float plane arrived to bring in two crew for the lower and take out Cliff Jacobson and another crew member, everyone was excited to see a birthday cake arrive and a watermelon that at least from my perspective was the best tasting fruit I have ever eaten. Those four were also treated to a magnificent 3.5 hour float plane rides across the Brooks Range and central Alaska

Bears were very common especially on the lower segment as the chum salmon run was beginning and we enjoyed some great views, and no scary moments. Most of the bears either ran when they saw us or stared at us as we passed by. One cranky bull moose was about as close as we came to fisticuffs with wildlife.

No mammoth bones this time, nor much archeology. Ricky Ashby, an Inupiat that lives on the river, was away seal hunting so unfortunately we missed the cultural insights he shared with the 2014 expedition.

The 2015 expedition really began in Fairbanks with a six-hour van ride to Coldfoot on the winter haul road made famous by the television program, Ice-Road Truckers. Then we were delayed by foul weather for 24 hours before Coyote Air’s Dehavilland Beavers on tundra tires could get us to the headwaters and the highest point I have ever begun on the Noatak. Once we arrived we put the five Pakboat canoes together.  The great weather and stalwart paddlers had no trouble getting and keeping us back on schedule, even with allowing plenty of time for fishing and hiking. The trip ended in Kotzebue just a couple weeks before Obama arrived there . GREAT TRIP a big thank you to my great crew.

When I was planning my 400-mile commercial Noatak Expedition I had a wonderful thought. Since I would end in such a wild and wooly corner of the globe why not attempt a second river?

I had planned on the Kelley River, a tributary of the Noatak that enters the river about 50 miles upstream of Noatak Village. In preparation for this trip, Andy Jenks had made me a set of beautiful maps.  I contracted with a bush pilot to fly us in on tundra tires and land on a gravel bar near the headwaters. This was a great plan, unfortunately all those blue sky days we experienced this year on the Noatak River also resulted in very low river levels throughout the Noatak watershed. Flying over the Kelley it became quite clear that paddling the river, this year, would be impossible and if we tried, lining and wading (and weeks) would be required throughout a long braided section of the river. My Inupiat friend Ricky Ashby had told me about the Kugururok River which ran parallel to the Kelley but just twenty miles upstream on the Noatak. I asked the pilot if he had enough fuel to try for the Kug. He nodded, and a half hour later we landed on a gravel bar about 75 miles up the Kugururok River from its confluence with the Noatak. Mapless and excited, we began a journey down a new river. Nothing is more energizing.

The Kug turned out to be a terrific little river with gin clear water, canyons, massive boulders and lots of grizzly bears. In fact, we saw 22 grizzlies in one week of paddling. More than a few were up close and personal. Our closest encounter, not counting the ones that walked by our tent, was an honest 18 feet. That bruin needed to be discouraged with a blast of my ten gauge over his head and then there was the “toothbrush” bear, but that story will have to wait. The only fly in the ointment was a change in weather that made the last few days moist and challenging. Our friends Myra and Noah Downing were great hosts when we got back to the village and helped get all our gear dried out and shipped back to the lower 48.

The drive back to Minnesota was eventful with shattered windows, more bears, rain, and some magnificent hiking in Kluane, Whistler, Glacier, and the Badlands. In between, were spurts of working on the “Merlyn Project” — my biography of Merlyn Carter that keeps enlarging. Because Merlyn’s life ended in the claws of a bear, I think all my encounters with bears this summer were not accidents and strengthened my resolve to make this biography real and heartfelt. 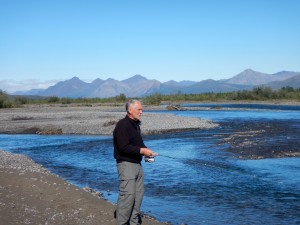 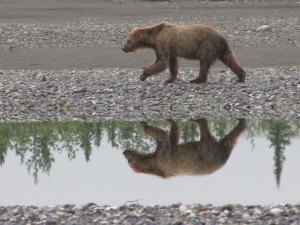 NOTE: some of the attached photos were taken by crew members Barry Simon and Scott Huffaker 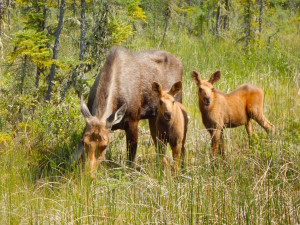