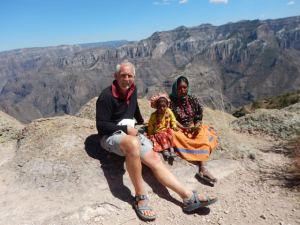 After completing four consecutive and very successful expeditions through the Rio Grande’s Lower Canyons, I decided to venture even further south in quest of more wild rivers and canyon walls. For decades, I have had my heart set on experiencing Mexico’s Copper Canyon (Barranca del Cobre). Allegedly it is deeper than Arizona’s Grand Canyon and four times bigger in size. Reading Edward Abbey’s chronicles by the light of a campfire on the Rio Grande and listening to Larry Rice’s stories further piqued my interest. Plus, with the Nahanni, Grand, and RG Lower Canyons under my belt I thought this would complete the big four of North American canyons. There was also a strong commercial interest. Could I lead guided canoe trips in March down the Urique River which flows through the bottom of the Copper Canyon after my Rio Grande season was complete? 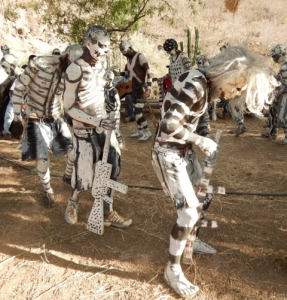 My co-guide, Susan Plankis, accompanied me on this trip and we did it “on the cheap”. A Mexican train runs the entire length of the canyon, but we travelled by second-class bus at one- fourth the cost (about two dollars an hour). It was closer to the river and more gritty. We never saw another gringo on the bus, and Easter Sunday our bus was one big overstuffed burrito. Every seat was full, and people spooned all the way down the aisle right to the door. I have not seen anything like it since rush hour on a Tokyo subway 40 years ago. I mean it was squishy, and for hours. An Indian woman sat on my lap for a long time, and the bus teetered on switchbacks that dropped into nothingness. Loved the sights and smells and very happy I did not need to use the toilet on the 8-hour journey.

The Copper Canyon was magnificent. Our Terlingua friends, Bud and Irene, from BJ’s RV Park (the place to camp in Terlingua) turned us on to Diego Rhodes, an outfitter, hotel owner and the most connected man in the Copper Canyon. He took us everywhere. He knows everyone from the Tarahumara Indians to the drug runners. He is the Joe Cavanaugh of the Copper Canyon. 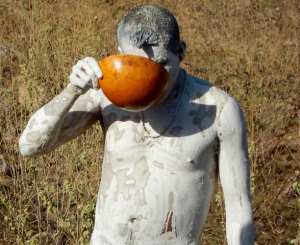 The hiking is incredible. You pass through three biomes as you descend the canyon. From passing giant pine cones at the top to passing hanging tropical fruits at the river. Unfortunately, flow on the Urique is too unpredictable for scheduled canoe trips in April, and probably too high and fast for canoe trips in the rainy season. Maybe ok at higher water for pushing rubber but not for paddling canoes.

Although there may be some truth in the news stories describing kidnapping, ransoms, sadistic torture and murders, but none of that stuff happened to us. The nicknamed “Butcher Shop” did not seem justified. The people we met were kind and we were lucky to be invited to participate in some of the Tarahumara Easter rituals. Drums….enough said. You can read about the marathon running talent of the  Tarahumara in the book, “Born to Run”. Most of Tarahumara scratch out a subsistence existence with hard scrabble farming. Diego helps many of the children who have health concerns or have been orphaned. It was a real eye-opener to follow him on his rounds. I had wanted to do a horse pack trip and Diego once had a bustling horse pack business. The Narcos like horses to move their product and lately with some cartel vs cartel violence it was just not safe to go down the canyon on horses. Despite my pleas, Diego held fast. I think he was worried about losing his horses but his reluctance rules out any scheduled commercial trips for me. Too much uncertainty. We hiked through fields of poppies cultivated by the Tarahumara who can make $40 a day working for the cartels instead of the equivalent of $15 a day growing corn and beans. You cannot blame them especially when they were urged for decades by Americans not to help the cartels cultivate marijuana only now to see it legally grown in Colorado. I think it would be hypocritical to ask them to curtail their heroin business. Still it was a bit disconcerting to hike through poppy fields slashed out of the beautiful pine forest. And it was a bit unnerving to witness narcos with an AK-47 slung over their shoulder walk the villages with impunity. 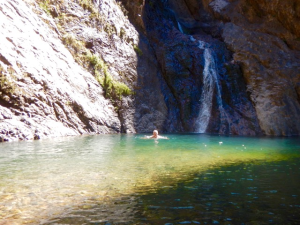 The Copper Canyon remains a great traveller destination especially with so many Mexican cities and beach towns swallowed up by ticky-tacky “luxury hotels” and same-old. fast food franchises. My favorite part were the open pine forests I think the understory is kept pruned by herds of domestic goats –maybe hooved critters is what is needed to restore the burr oak savanna of central Minnesota. I would return to the Copper Canyon, but it’s not suitable for an Uncommon Seminar. Maybe a little too uncommon.