That Dog Sammy, We Meet Again

I know I am way behind with my Blog and people have been clamoring for more Africa stories especially the Zambezi River trip, Rio Grande updates, and more; however a singular event occurred last night that pushed this take to the the top of the pile.

Last February 17, I blogged about “That Dog Sammy” the toughest Yorkie in Texas. Well last night I was walking across the parking lot of Terlingua’s Starlight Theater with a can of beer in my hand and a hankering for some West Texas brisket when I saw that same Yorkie dragging his glowing penlight flashlight which dangled from his collar through the dirt and stirring ups cloud of dust.

My scream, “That’s Sammy!” is all it took for his cowboy sidekick to start a three minute soliloquy. Apparently, earlier that day, blind, dumb, deaf, mute, Sammy had fallen down an old abandoned mine shaft in the Ghost Town. The bottom of the shaft was deep with quicksand, Texas mud. And Sammy went under. All the cowboy could see was a dim glow of the penlight flashlight on Sammy’s collar. After a three-hour struggle the cowboy finally hooked and yanked Sammy out, with a noose on the end of a rope.

Sammy was none the worst for it it but the Cowboy could only say, “Sammy? He’s just a 14-year old, stuffed animal with a beating heart, but he will always be my pard.”

I leave tomorrow with my third group of the season on an eight-day expedition down the fabled Lower Canyons of the Rio Grande. The first two trips have been incredible. The water level for the first expedition was too high to safely navigate the Lower Canyons by open canoe, but meant there was enough water, for the first time in a decade,  to run the the Upper Canyons – including the Great Unknown, Tight Squeeze, Bouquillas Canyon and the incredible Mariscal Canyon. The water was still much higher than usual but safe enough to run the Lower Canyons with group 2 and we had a fantastic trip with big rapids, sunny warm days and super mesquite campfires. 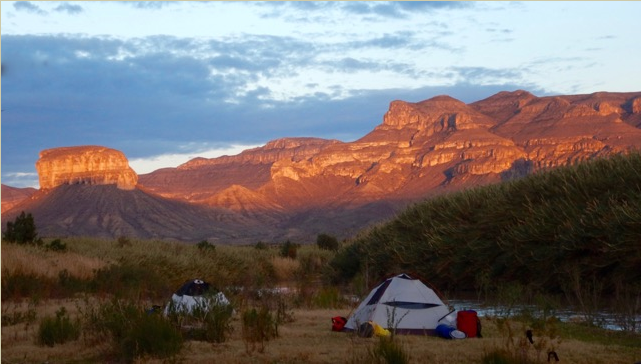